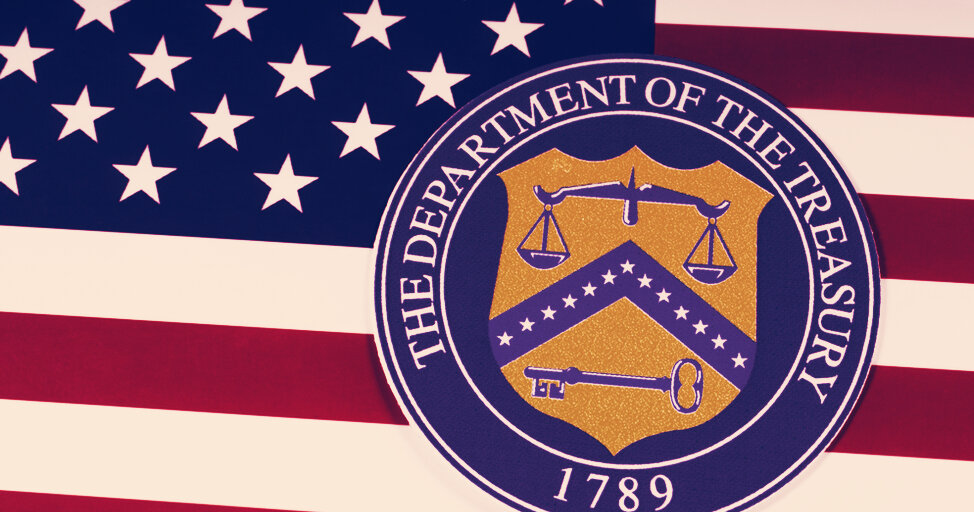 The US Treasury is about to impose new restrictions on money services businesses (MSBs) that interact with self-hosted crypto wallets, as pointed out by Coinbase CEO Brian Armstrong and reported by The Block.

It’s anticipated that the new rule will request MBSs to file currency transaction reports when a client conducts a crypto-related transaction above a yet-to-be-confirmed threshold. The rule might be similar to current reporting transactions well established in the traditional finance world—so it hasn’t come as a total shock.

“That crypto businesses may have to report sizeable movements of crypto to the US Treasury would be a big development in the crypto industry—however it doesn’t come as a particular surprise, places like Singapore and Switzerland have already been anticipating such a rule,” Lucas Huang, head of growth at decentralized exchange Tokenlon, told Decrypt.

Reporting requirements are commonplace in traditional finance, but the cryptocurrency industry has often been reluctant to accept similar restrictions on transactions.

“It may add to the much discussed legitimacy and confidence in the crypto space which is a good thing, however the ideology behind using and trading crypto is so much about having ownership of your wealth, independent of third party influences,” Huang added.

These anticipated regulations mean changes are coming for owners of self-hosted crypto wallets, as well as the relevant money services businesses themselves.

The exact restrictions are not yet known, but it is anticipated that MBSs will be required to provide identification information about their clients.

Specifically, this would be likely to mean that the relevant companies would need to report identifying information of wallet holders—such as their name—either before a transaction was permitted, or as part of a transaction taking place.

Again, while the exact regulations are not yet known, it is expected that these requirements will only be activated when a minimum threshold is activated by any particular transaction.

In existing American legislation, reporting requirements are typically activated when a transaction exceeds $10,000.

The exact consequences for individuals and companies will become clear if and when the regulations come into force. But US Treasury secretary Steve Mnuchin—the mind behind the proposed regulations—has been subject to criticism in recent weeks.

Owners of crypto wallets can expect to provide identifying information about themselves as a result of these anticipated regulations. This could conceivably include details about their permanent address, their date of birth and their name.

Brian Armstrong, CEO of Coinbase, said that those wallet holders who live in poverty might encounter difficulty with the proposed US Treasury regulations.

“Some of these individuals are living in poverty, and may not have any permanent address or form of government ID,” Armstrong said in November.

What’s more, wallet holders might anticipate a reaction from the markets, if and when these regulations come into force.

“What has largely been discarded is the notion that Mnuchin and the FATF’s new self-custodial wallet regulations will have a meaningful impact on price,” Joshua Lim, head of derivatives at Genesis Global Trading, told The Block.

It is not just individuals that will be affected by these restrictions however. Companies can expect some changes too.

Several US Congressmen have publicly opposed Mnuchin in his quest to impose new restrictions on crypto wallets.

In a letter sent to Mnuchin on December 9, 2020, Congressman Warren Davidson—alongside Congressmen Tom Emmer, Ted Budd, and Scott Perry—urged the secretary to “rethink these regulations and consult with Congress on FinTech.”

I’m troubled by rumors that @StevenMnuchin1 plans to enact burdensome regulations on digital self-hosted wallets. My colleagues @RepTomEmmer, @RepTedBudd, and @RepScottPerry have sent a letter to @USTreasury urging him to rethink these regs & consult with Congress on #FinTech. pic.twitter.com/p7HPtuuizn

In the letter itself, Davidson criticized the anticipated regulations as damaging to American competitiveness on the global stage.

“If such a proposal requires a company to determine the owner of a self-hosted wallet, with which the company’s users wish to transact, then American’s utilization of digital asset transactions would be placed at a significant disadvantage to our global competitors,” Davison and his colleagues said.

In addition, the group said the proposed regulations risk the United States’ ability to stop bad actors from exploiting the system. “The contemplated regulation would not meaningfully support law enforcement, while it would raise privacy concerns and place impractical regulatory burdens on digital asset users and companies,” the Congressmen added.

It’s not just members of Congress that have criticized the US Treasury’s anticipated regulations. Big names in the crypto industry have done so too.

Last week we heard rumors that the U.S. Treasury and Secretary Mnuchin were planning to rush out some new regulation regarding self-hosted crypto wallets before the end of his term. I’m concerned that this would have unintended side effects, and wanted to share those concerns.

“For those who don’t know – self-hosted crypto wallets (also known as non-custodial wallets or self-custody wallets) are a type of software that lets individuals store and use their own cryptocurrency, instead of needing to rely on a third party financial institution,” Armstrong said.

Armstrong added that he anticipated the proposed regulation will require companies like Coinbase to “verify the recipient/owner of the self-hosted wallet, collecting identifying information on that party, before a withdrawal could be sent to that self-hosted wallet.”

This—according to Armstrong—would not only be an unwelcome development by those who value their financial privacy, but it would force American customers to use “foreign unregulated crypto companies.”

According to sources who spoke to The Block, the new restrictions could be in place by as early as today.