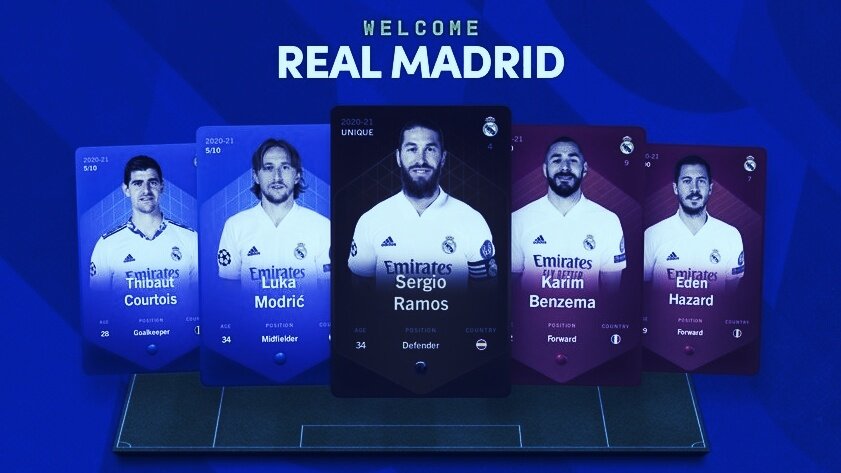 Sorare allows football fans to collect and trade digital cards in the form of Ethereum non-fungible tokens (NFTs) in order to compose a “dream team” and pit it against other players.

With the addition of Real Madrid, users can now add NFT cards representing players such as Thibaut Courtois, Federico Valverde, Raphael Varane, and others to their collections.

Notably, prices for some of the rarest cards can reach thousands of dollars due to their scarcity and uniqueness provided by NFT technology. As Decrypt reported, a trading card representing Paris Saint-Germain’s forward Kylian Mbappé was sold for €55,105 ($64,744) on Sorare last week—the most expensive one so far.

“The €55.000 Mbappé sale was indeed our record. Our previous record on the auction was the Neymar sale or in the peer-to-peer secondary market, it was Carlos Vela unique. Cards are valued based on two criteria by buyers: collectability (scarcity plays a huge role there) and utility in-game (scarcity also plays a role),” Sorare CEO Nicolas Julia told Decrypt.

However, it doesn’t mean that only the wealthiest football fans have a chance at winning, he noted. For Sorare not to become “pay-to-win”—a stigma many competitive mobile games are known for—the fantasy football platform divides players into different divisions akin to weight categories.

“This card [Mbappé] is not considered as cheating or pay to win as you can only play it in certain division (DIV2 or DIV1) where people have a similar scarcity of cards (unique or super-rares). The game is balanced so that people of similar budgets play against each other in the different leagues!” Julia said.

Additionally, players can also sell their cards via an auction, potentially even earning some profit in the process. For example, pseudonymous user Maxmersch—the new owner of Mbappé’s card—had set the minimum bid at €122,682 ($148,553) right after they bought it, apparently expecting to earn an additional $83,800 for the NFT.

The NFT market is constantly breaking new records lately. On December 2, an Ethereum token for a virtual race track was sold for $223,000. Simultaneously, the crypto art scene has also gotten its first millionaire artist. And that’s not to even mention the currently rallying prices.