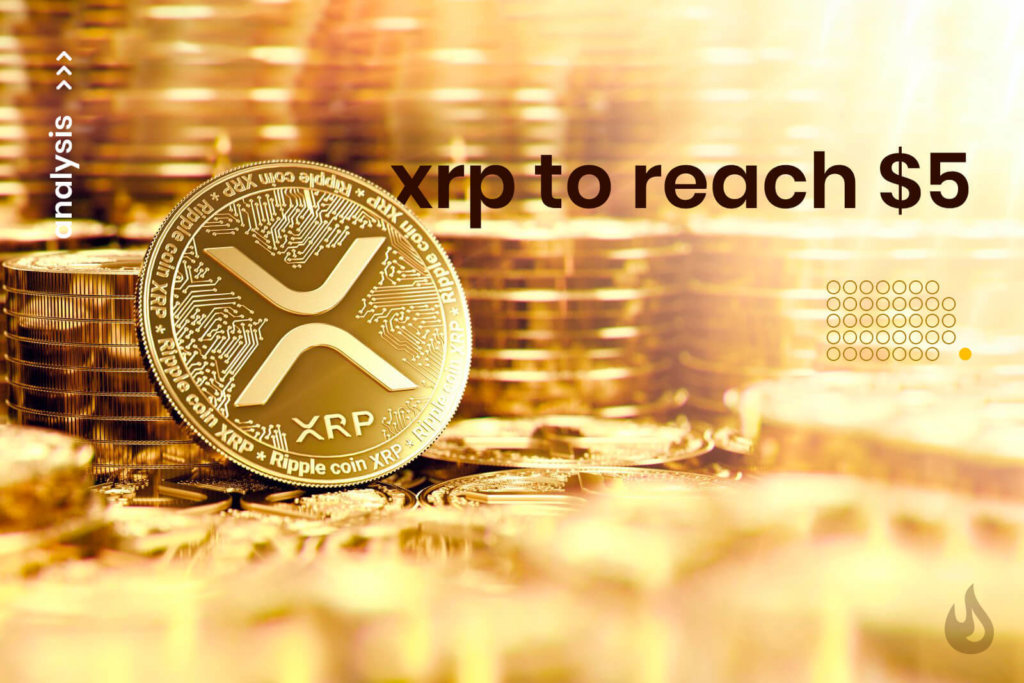 2021 has seen booms throughout cryptocurrency fields, with currencies like Bitcoin experiencing a whopping 500% boom. XRP, the currency founded by Ripple Labs, is one of the most popular cryptocurrencies today, with 1,353,784 transactions in the last 24 hours.

In recent months, the currency’s sharp incline was higher than most predictions, breaking the $1 mark in April 2021.

Longforecast.com, a leading name in crypto prediction, presents the most optimistic forecast we’ve seen so far, with a projected $3.05 per token in December 2021.

Analysts expect to see steady inclines in the value of the coin for the rest of the year but according to most experts, the coin’s long-term value depends on different factors:

If you’re thinking of following the trend and buying into XRP while you still can, the first thing you would have to understand are the scenarios in which the coin would peak at $5.

Winning the SEC vs. Ripple Lawsuit

XRP’s most significant decline came after the SEC filed a lawsuit against Ripple’s two executives for ‘selling unregistered securities,’ throwing investors and companies into a selling frenzy.

The primary concern heading into 2021 was that the SEC trial would force XRP to miss out on the significant bull run experienced by the most prominent cryptocurrencies. However, despite the SEC trial hanging over it, XRP has surprised analysts by rising to its highest level since December 2017.

A trial in March found that if Ripple is considered a “security” and not a currency, only Ripple and RippleNet can be held criminally responsible for selling it.

This development allows crypto exchanges in the US to allow transactions in XRP once more. Prior to this ruling, the delisting of XRP from Coinbase was a considerable blow that severely limited transactions of the coin.

Furthermore, in April a Judge denied the SEC access to eight years of personal information, a resounding victory for Ripple. These positive outcomes have promoted significant sureties for investors, leading to XRP’s current 100% rally.

Winning the SEC lawsuit is a significant victory for Ripple, removing some of the doubt investors have with the cryptocurrency. But what about predictive analytics? How do chartists with real-world experience expect XRP to perform, given its current sharp rate of growth?

Peter Brandt, the legendary commodities trader, released a tweet with a graph of Bitcoin and XRP. He explained that both form a “compound fulcrum pattern,” an infrequent occurrence only seen years apart.

Compound fulcrum patterns, Brandt says, are “extremely rare…In fact, if a chartist diagnoses this pattern more than once every few years, then it is being overdiagnosed.”

What Are Compound Fulcrum Patterns?

According to Brandt, compound fulcrum patterns usually imply that a commodity is ready for an extreme trend reversal after experiencing a period of a prolonged and extended decline. Brandt says that the formation of patterns such as these is a “powerful buy signal.”

While financial analysis like this is an educated guess at the best of times, Brandt’s interest in XRP has undoubtedly garnered it significant exposure.

Peter Brandt himself has turned bullish towards XRP and has purchased large amounts of the cryptocurrency to await its massive predicted peak towards the end of 2021.

XRP to Reach $5: “It Must Maintain Momentum.”

Everybody’s noticed the 2021 bull market; and this hasn’t excluded XRP. The currency is trading at higher rates than it has in over two years, making a strong comeback from its decline.

Experts agree that XRP reaching $5, with or without an immediate positive conclusion to the SEC case, looks pretty likely.

In the short term, crypto experts expect the currency to keep rising, with a potential high of up to $4. PrimeXBT, a respected trading platform for cryptocurrency, predicts XRP might far exceed $5, reaching a possible high of $22 in 2022.

Analysis of the Market

Currently, Ripple’s position as #3 by market capitalization comes from the ‘whale investors,’ entities that purchase between 1 to 10 million XRP tokens. XRP’s massive initial surges in price can almost entirely be attributed to these ‘whale’ investors.

Should the crypto follow existing trends, the price could easily break past $3 and towards $5.