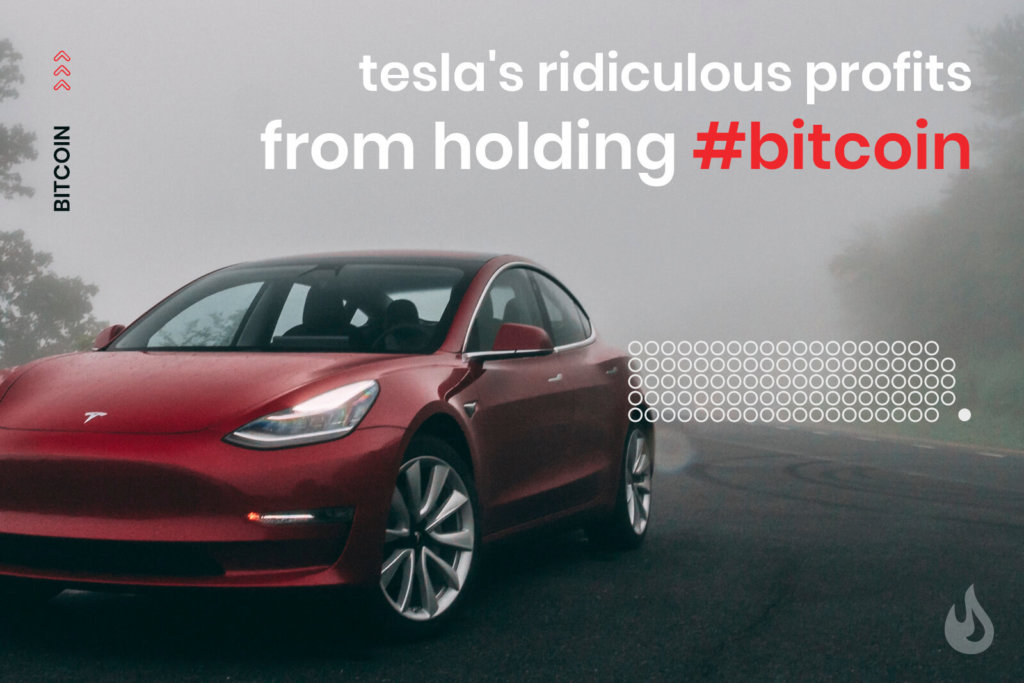 In February 2021, Tesla, the world’s leading electronic vehicle manufacturer, announced that it had purchased $1.5 billion worth of Bitcoin in a move to diversify its portfolio.

The move by the company was met with mixed reactions but had the unanimous effect of sending the price of Bitcoin to astronomical new highs.

The investment by Tesla triggered a massive institutional buying frenzy as more firms sought to follow the path set by Elon Musk’s company. Since the purchase, it seems like Tesla was the biggest winner as it has made a massive profit from holding on to Bitcoin.

Since the purchase by Tesla, Bitcoin has aggressively reached new highs and continued its bullish run with few signs of slowing down.

About a week ago, Bitcoin smashed through the $60k mark to reach an ATH of $61,683. That translates to gains of up to 72% for Tesla or approximately $1.08 billion in profits.

It is difficult to calculate exactly how much profit Tesla has realized through its Bitcoin investment because we can’t ascertain the exact moment when it made the buy.

Analysts speculate that the average Bitcoin price when Tesla entered the market was $31,210. With Bitcoin tethering near the $60k mark, it is safe to assume that Tesla has realized more than $ 1 billion in profits in around six weeks.

Dan Ives, an equity analyst at Wedbush Securities, commented that Tesla’s huge profits put in on course to make more from its Bitcoin investments than it did from selling its EV cars in all of 2020.

Charting The Course For Other Firms

Elon Musk has not shied away from expressing his views about Bitcoin, other cryptocurrencies, and blockchain technology, and it was just a matter of time before we saw decisive steps from his firms.

The Bitcoin investment move means 4.5% of the company’s total assets and one-eighth of its cash has been invested in Bitcoin. Days after the purchase, Bitcoin rallied, and other corporations began to plot their entry into the industry.

Chinese software firm Meitu has also made the decision to expand its cryptocurrency holdings by purchasing 386.086 BTC, valued at $21.6 million, and an additional 16,000 ETH.

Wall Street banking conglomerates like BNY Mellon, JP Morgan, and Morgan Stanley have all reportedly made forms of crypto investment following calls from their customers seeking to get their hands on digital currencies.

Microstrategy is another major beneficiary of the Bitcoin rally. In December 2020, the investment firm announced a $400 million target, but it hit $650 million from selling senior convertible notes – money that was used to invest in Bitcoin.

At the time of the purchase, Bitcoin was around $23k. However, the asset is currently valued at around $59k, a more than 170% price rise in three months. For companies that have invested in Bitcoin, it has been a great ride, potentially opening up the opportunity for others to join in.