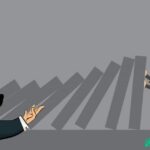 The heavy hitters in traditional finance have been concerned about the recent stock market action fueled by Redditors and a colossal number of retail investors. This week a Goldman Sachs executive warned that if these short squeezes continue it could “snowball through the market.” Moreover, Interactive Brokers founder Thomas Peterffy made similar comments this week saying these types of systemic risk can “take down the entire system, theoretically.”

Wallstreetbets Trend Could ‘Snowball Through the Market’

2021 has been an interesting year so far and this week a Reddit forum called r/wallstreetbets sparked a whole new hot topic. Four days ago, news.Bitcoin.com reported on the stock market fiasco that started with short squeezing Gamestop (GME) shares. But GME shares were not the only stocks that felt the push as the wallstreetbets (WSB) trend started leaking into a number of other types of shares.

For instance, stocks from the Russell 3000 Index (RUA) were targeted including tickers like NOK, GOGO, AMCX, and FIZZ. The social media craze even leaked into the cryptocurrency world pushing up coins like dogecoin and XRP as well. Estimates assume that short-sellers have lost “$70.87 billion from their short positions,” according to statistics from the financial data analytics firm Ortex.

An analysis from Zerohedge discloses that Melvin Capital lost a whopping $7 billion during the month of 2021. “Melvin Capital lost 53% in January, as Gabe Plotkin (a former SAC Portfolio Manager), lost over $5.3 billion in one month,” the report noted.

The financial newsdesk has also been reporting on another WSB trend taking place during the last week as short squeezers want to squeeze the silver market. One thread on r/wallstreetbets suggested that the power of the masses could squeeze the price of silver from $25 to $1,000. Zerohedge has been reporting on trends that show Redditors and social media users have managed to invoke demand for silver.

“In the 24 hours proceeding Friday market close, SD Bullion sold nearly 10x the number of silver ounces that we normally would sell in an entire weekend leading to Sunday market open,” the finance reporter disclosed. “In a normal market, we normally can find at least one supplier/source willing to sell some ounces over the weekend if we exceed our long position (the number of ounces we predict we will sell over the weekend).”

Additionally, polygon.com contributor Owen S. Good reported this week on how the meme-driven stock’ rally rescued AMC theaters from $600 million in debt. Meme lords and Redditors saved this business, not the U.S. federal government, not the bankers. Those groups were actively shorting AMC down the toilet. “Theater chain gets unexpected lifeline when private equity trades a corporate IOU for stock,” the author’s report explains.

r/wallstreetbets is now the largest hedge fund in the world.

“The most heavily-shorted stocks have risen by 98% in the past three months, outstripping major short squeezes in 2000 and 2009,” Kostin’s study details. “This week demonstrated that unsustainable excess in one small part of the market has the potential to tip a row of dominoes and create broader turmoil,” the Goldman analyst added.

According to Durden from Zerohedge, Goldman’s Hedge Fund VIP list declined by 4% this week during the WSB fiasco. “In recent years elevated crowding, low turnover, and high concentration have been consistent patterns, boosting the risk that one fund’s unwind could snowball through the market,” Goldman’s David Kostin concluded. Durden interpreted Kostin’s final conclusion in a different way.

Translation: if WSB continues to push the most shorted stocks higher, the entire market could crash.

Interactive Brokers Chairman: ‘It Can Take Down the Entire System, Theoretically’

Goldman Sachs executives are not the only financial heavyweights weighing in on the stock market craziness and the possible aftermath. The founder and chairman of Interactive Brokers Group Inc., Thomas Peterffy, discussed his thoughts about the stock market madness in an interview with Marketwatch financial author Mark DeCambre.

On Thursday, DeCambre said that Peterffy explained that the short squeeze action could go on for a very long time unless it was stopped. DeCambre also wrote that Peterffy was worried about systemic risk and “the potential” for this trend “to ripple throughout the market.”

“It can take down the entire system, theoretically,” Peterffy stressed in his interview with DeCambre. “There is no reason why a short squeeze cannot go on indefinitely,” the Interactive Brokers founder detailed.

i’ll be on @business at 4:20 pm ET to talk memestocks, gamestonk, robinhood, bitcoin, dogecoin, papa musk, and where we go from here

the revolution *will* be televised

Meanwhile, a number of cryptocurrency enthusiasts have been cheering the WSB trend on as the virality of WSB vs Wall Street has encapsulated nearly all the social media conversations in the U.S. Meltem Demirors, the CSO of Coinshares, Europe’s largest digital asset manager with $3 billion in assets under management (AUM), gave her interpretation of the recent stock market events rattling the status quo.

“At its core, the events of this week are about free speech, censorship, and power. We are witnessing the fastest roll-up of power in human history,” Demirors said.

“As our lives become increasingly dependent on digital mediums,” Demirors continued. “So does the ability of powerful entities like governments and corporations to censor our right to free speech, our right to gather, our right to protest, and more. There is an unprecedented amount of power up for grabs, and what we see is a battle for control. It already played out on the political stage, and is now playing out in financial markets, financial media, Fintech platforms, and social media,” the Coinshares CSO added.

Furthermore, on January 29, the cryptocurrency trading platform Bittrex Global revealed that it was listing tokenized stocks for a number of the shares the WSB trend has been affecting. The exchange detailed that it made the decision because Bittrex wanted to “ensure retail investors have exposure to stocks they may wish to trade anytime during any day of the week.”

What do you think about the recent wallstreetbets (WSB) trend and Goldman and Interactive Brokers executives warning of systemic risk to the traditional finance system? Let us know what you think about this subject in the comments section below.