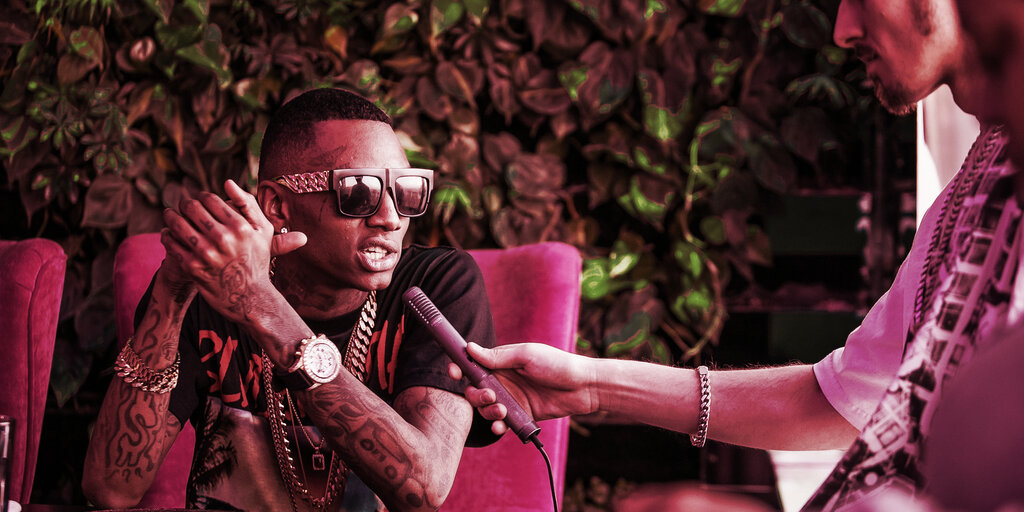 On Friday, rapper Soulja Boy tweeted a question that the world didn’t know it needed: “Who can help me make SouljaCoin a real thing without getting into any legal trouble with SEC?”

Who can help me make SouljaCoin a real thing without getting into any legal trouble with SEC etc.. like real and legit I think this could be big Idk. contact me thanks

He’s not the first musician to have pondered getting into crypto. In fact, fellow platinum artists Lil Yachty and Akon have already brought out their own cryptocurrencies, while late rapper MF Doom’s final creative project was a set of Ethereum-powered NFT virtual masks.

So, sensing an instructive response in the offing, Decrypt seized the opportunity, picked up the phone and posed the question to Stephen Palley, crypto expert and lawyer for Anderson Kill, who laughed and exclaimed “I don’t know!” before reflecting.

“The question that the SEC will be expecting Soulja Boy to answer is ‘what does he want to do with it?'” Palley said. “It’s almost impossible to say if he would run into legal trouble with the SEC simply by saying, ‘I wanna have a Soulja Boy token.’”

So we probed further. Soulja, consider this your sermon and Decrypt your Zarathustra.

What’s a security under US law?

Whether a crypto token constitutes a security is the subject of a particularly grueling courtroom wrangle between XRP token makers Ripple and the US Securities and Exchange Commission, who last month filed a lawsuit alleging that Ripple sold XRP as an unregistered security. Ripple denies the allegations.

The lawsuit is the latest of dozens of similar suits filed by the SEC against crypto companies, and Soulja Boy would be wise to avoid being crippled by similar potholes.

Soulja, here’s a quick primer: To the SEC, a security is an “investment contract.” It is essentially a financial instrument that gives investors an expectation of future profits.

To work out what counts as a security, the SEC in 1946 developed the Howey Test. The outcome of the test determines whether “a person invests his money in a common enterprise and is led to expect profits solely from the efforts of the promoter or a third party.”

How have crypto companies tried to appease the SEC?

To avoid registering as a security, Soulja Boy would either have to prove to the SEC that his tokens don’t constitute an investment contract or he would have to play ball and register it with them.

Soulja could create his token in the form of a Security Token Offering, where the coin is registered as a security. But this comes with its own problems: registering an asset as a security would restrict Soulja’s trading options and subject the cryptocurrency to additional red tape. Requesting a letter of “no action” could also be a long shot, as the SEC has only issued a handful of such letters.

Still, registering with the SEC is not impossible. Musicians have created securities long before crypto.

In 1997, when Soulja Boy was but a seven-year-old lad, Bowie Bonds were issued by banker David Pullman at the instigation of the Thin White Duke himself to monetize his future royalties. The bonds were backed by Bowie’s own cash flow potential, which by this point included royalties from a back catalog featuring such monoliths as Ziggy Stardust, Hunky Dory and Young Americans.

“Something like that would certainly be a security,” said Palley. “If a SouljaCoin is an investment of money in a common enterprise, with an expectation of profits from the efforts of others, It would be something like an investment contract. That would fall into the definition of security.”

If Soulja Boy didn’t want to go through the hassle of issuing a security, he would have to convince the SEC that the token is genuinely useful and not a quick cash grab. This is the illustrious “utility token”: cryptocurrencies claimed by its creators to have purpose beyond speculation.

Soulja Boy should ask himself some questions first, said Palley: “Will SouljaCoin be redeemable for something? Or will it tokenize participation in future cash flow? Perhaps if you have enough of them you can ask him to put your name in a song, or write about something you suggest, or shoot a video in a certain place. The closer it is to something like that, the less likely it is that it’s a security.”

This is the route that Lil Yachty opted for. YachtyCoin is a ‘social token’—a way for a creator or influencer to get closer to their fans by selling them cryptocurrency. Just like any healthy, loving relationship, supporters can show their loyalty by buying an influencer’s cryptocurrency, which they can then redeem for goods and services (or, OR! sell on to other fans or crypto collectors). Holders of YachtyCoin can expect a range of exclusive benefits, including the chance to appear in a Lil Yachty video, have a virtual meet-and-greet, a Tik Tok collaboration or a follow back on your social media.

Akoin, on the other hand, will become the native currency of Akon City, the $6 billion smart city that Akon is building in his ancestral homeland of Senegal. Akon piloted the coin in Kenya, specifically in Mwale Medical and Technology City, a $2 billion medical complex in Kakamega county.

Akon sets out vision for his cryptocurrency and Akon City

However, lots of attempts to market cryptocurrencies as “utility tokens”  have blown up in their creators’ faces. For instance, when litigating against chat app Kik for its ICO for Kin, the SEC remained unconvinced by Kik’s counsel’s arguments that the token had utility, since its CEO, Ted Livingston, went on CNBC in May 2017 and said that investors would “creat[e] a place where they can create value for each other transacting in a new cryptocurrency. And that alone is enough to make a great financial return.” Kik lost the case.

So, Soulja Boy: however you approach the matter, we’re thrilled you’d like to join our community. So that the SEC doesn’t pick you off, our only piece of advice is that you hire a lawyer.

The views and opinions expressed by the author are for informational purposes only and do not constitute financial, legal, investment, or other advice.