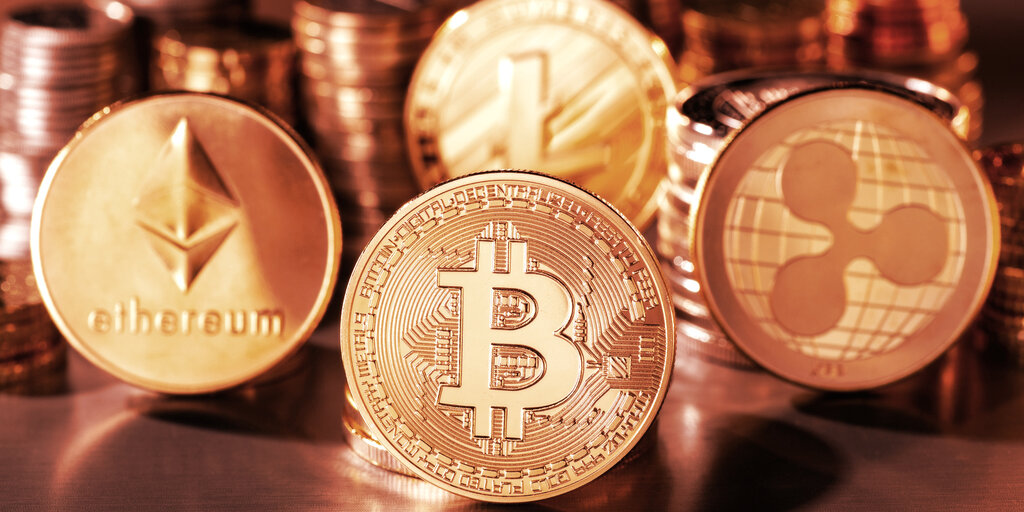 While it’s hard to say whether those are all cryptocurrencies in existence, this is another major milestone for the 6,124 digital assets that the platform tracks.

“Behind this milestone once again lurks the financial crisis, which caused money to flow into the safe haven of gold, but also out of gold and into its digital equivalent—Bitcoin. With BTC gains now starting to spill into altcoins, we’re likely to see greater diversity and a more even spread among large-cap assets. And, as I’ve said before, it is also likely that Bitcoin will capture at least 10% of gold’s market,” Antoni Trenchev, managing partner of crypto lending service Nexo, told Decrypt.

Unsurprisingly, Bitcoin is the absolute leader in terms of its $674 billion market cap, sucking up two-thirds of the market. Ethereum is ranked second, with a market cap of $135 billion. Notably, these are the only two cryptos—at least so far—that are ranked among the 100 biggest assets in the world.

Speaking to Decrypt, Geoff Morphy, president of Canadian publicly-listed Bitcoin mining operation Bitfarms, argued that $1 trillion is still only the beginning since people will continue to look for ways to preserve—or increase—the value of their assets.

“For 5,000 years, people have utilized some form of currency. Before that, they bartered goods. Either way, for thousands of years, people have recognized value and have been incredibly resourceful and creative in their ways to increase value or at the very least, preserve their net worth positions. People are no different today,” Morphy told Decrypt.

He noted that the difference is that the sophistication level is much higher and people have considerable options today. As they see their net worth positions eroding due to inflation or other devaluation events, they seek alternatives. And this is when Bitcoin comes in.

“Case in point, people have debated for decades as to whether gold is an effective safe-haven or hedge. With the emergence of Bitcoin and other cryptocurrencies, new alternatives exist. Bitcoin by design is safe, secure, easily traded, cannot be manipulated, and is inherently scarce since only a finite number of BTC can ever be minted,” Morphy noted.

He argued that cryptocurrencies are not responsible for increasing the global net worth. Bitcoin and others “are simply the beneficiaries of people making decisions to move assets from one asset class to another to preserve the value of their net worth.”

By various estimations, the value of all money in the world is around $95 trillion—with crypto representing about 1% of that. It’s not a perfect comparison to compare Bitcoin with money (it can be seen as an asset instead) but it provides one way to put it in perspective. And some of those funds are constantly flowing into digital assets as people are looking for alternatives to fiat, Morphy noted.

He added, “Based on their structure, billions and billions of dollars of value will continue to shift to Bitcoin and other cryptocurrencies as people seek to preserve and enhance their net worth.”