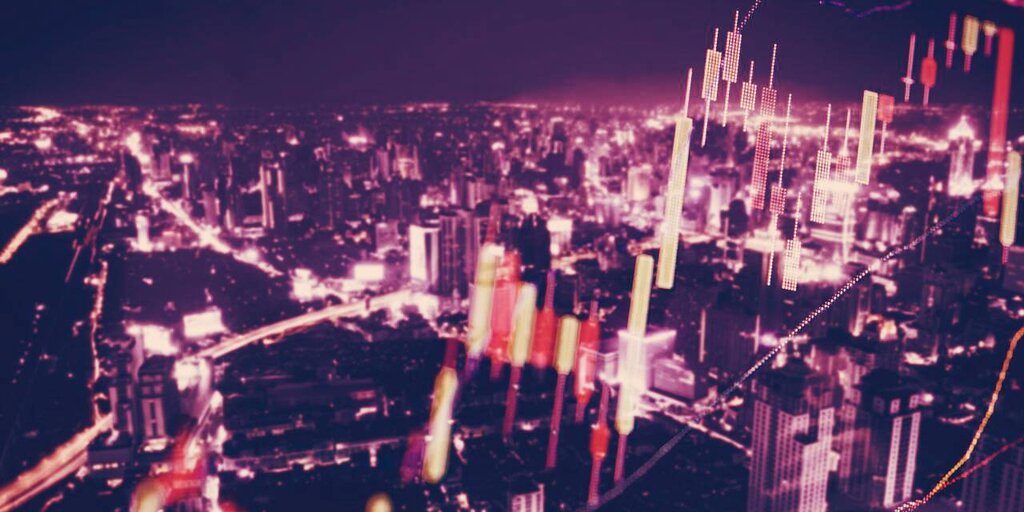 To beat the competition, high-frequency trading firms—whose algorithms place millions of finely-tuned trades each day—broker special trading deals with the companies that run cryptocurrency exchanges, or pay to place their trading bots inches away from an exchange’s servers, reducing latency.

“If most of the trading actually in price discovery happens there, then we’ll have to have more sophisticated market making strategies,” said Anil Kamath, the CTO of Efficient Frontier, an Israeli HFT firm that’s been in the algo trading business since 2006 and in the crypto market in 2016.

Granted, decentralized exchanges form just a tiny part of the market. As of late November, $629 million worth of cryptocurrency was traded on DEXes in 24 hours, according to Dune Analytics, out of the total amount of crypto traded in the entire market: $196 billion, per CoinMarketCap. That means that trading on DEXes forms just 0.3% of the entire crypto market’s trading volume.

New kid on the blockchain

DEXes are very new, and even the CEO, Roei Levav, says that he is unsure that they “are the place for HFT,” at least not for now.

But there are a couple of reasons why HFTs might run trading bots on decentralized exchanges, and they explain why Efficient Frontier, which trades about $150 million per day, as well as several other high-frequency trading shops, are eyeing up DEXes.

Unlike centralized exchanges, DEXes aren’t beholden to regulators and users can list any token they like. That means that HFTs can place trades on tokens before they hit major exchanges. And decentralized exchanges are non-custodial, meaning that, at least in theory, creators can’t pull an exit scam.

But for HFTs to take advantage of decentralized exchanges, they must change their strategies.

For starters, DEXes, which are still in their infancy, are slow and expensive to use. “The cost for placing orders, canceling orders, and getting information is much [higher] than we’re used to that in the traditional exchanges or centralized exchanges, where the cost of placing an order is negligible,” said Levav.

Levav added that money usually earmarked for, say, co-location services—moving trading bots closer to an exchange’s servers—could be spent paying higher transaction fees on decentralized exchanges. If a trading bot pays to get its trade processed quicker than the competition, it could outpace the market to make a profit. An HFT could even run a node and act as the validator, such that they could reorganize transactions in a block to ensure that their trade goes in front of someone else’s.

Levav also said that HFTs could use layer-2 solutions—software that sits atop a blockchain to execute trades faster. “DEXes just have a very high cost for doing different operations,” he said. “So we can optimize our models […] and have to kind of be very ‘real-time’.”

And that’s a challenge—they are already spinning multiple plates at once. “Cryptocurrency exchanges are a very different animal from exchanges in traditional markets. They’re basically acting in at least four or five different roles. They are the exchange, the custodian, they handle the processing, and they’re the broker,” said Levav.

As such, they’re prone to instability, slowness and, occasionally, scams. But this year performance on centralized exchanges has improved. “The main ones are getting very close to what we are used to in traditional markets. You’re talking about 10s of milliseconds round trips, co-locations,” he said.

And others are moving away from Amazon’s cloud-based hosting, which “obviously is not suitable for high-frequency,” he said, given the need for low-latency trading—and toward specialized data centers.

For one, although decentralized exchanges are on the rise and full of potential, they form today an entirely insignificant part of the cryptocurrency market. “I think high-frequency trading specifically on DEXes is not quite developed, and so a lot of these firms look to other strategies to make money right now,” said Lau.

“High-frequency trading specifically on DEXes is not quite developed.”

Essentially, if it ain’t broke, don’t fix it. “I think the trustworthiness and understanding of how centralized exchanges work is higher,” he said. Lau said that it’s highly unlikely that sophisticated institutions will move to unregulated, decentralized exchanges anytime soon.

James Banister, CEO of FXEcosystem, a software company that creates the infrastructure for cryptocurrency exchanges, among them Bitfinex, says that “no one thing is the golden goose.” Centralized exchanges incorporate it all: colocation, staff monitoring the exchange 24 hours a day, and, in many cases, years of experience.

“It’s a bit like a power station: you just flick a switch in your house and you expect power to be delivered. What you don’t see is everything that goes into creating that power, monitoring that power, and delivering it.”

Banister thinks that distinguishing between the two is somewhat of a misnomer, anyway, since there are hundreds of centralized cryptocurrency exchanges dotted all over the world. “It’s not like the equity markets in London or New York, where [things are] concentrated down to two or three exchanges, I think, for the foreseeable future, you will continue to see multiple exchanges come and go in this space,” he said.