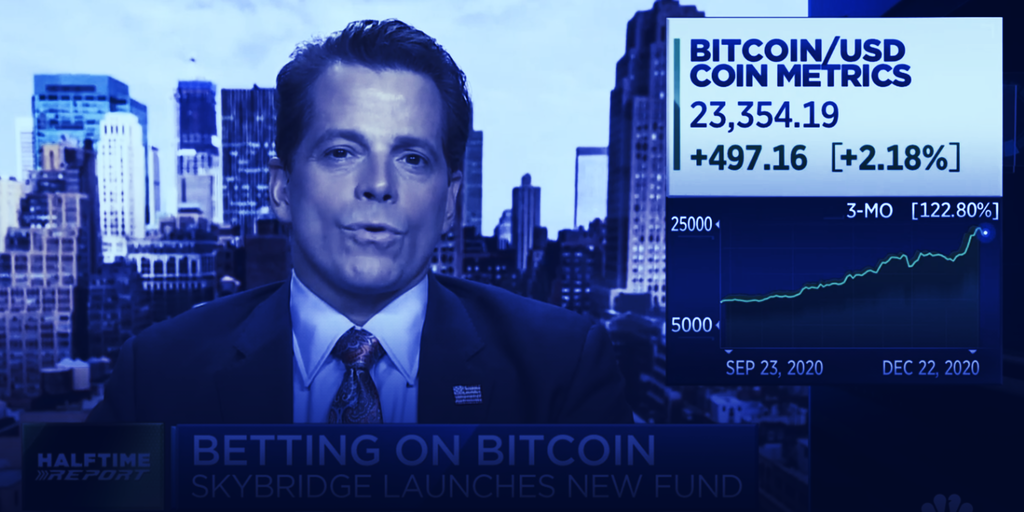 The SkyBridge Bitcoin Fund, which yesterday registered with the US Securities and Exchange Commission, commenced trading today with $25 million in Bitcoin invested by SkyBridge. The fund will welcome investments from outside investors on January 4, said Scaramucci.

“You either have to accept that Bitcoin is a store of value or not,” he told CNBC. “After doing the research, we believe it is. And given the monetary supply and the global central banking coordination right now, this will be a very strong asset class over the next decade,” he said.

Scaramucci told CNBC, “We would have loved to have deployed the fund three or four months ago,” but believes that Bitcoin has not yet reached its peak. “This is something that has crashed upwards in the last two-and-a-half to three weeks,” he said.

To deter investors from flipping shares in his Bitcoin Fund for a quick buck, the fund has implemented a three-week-long holding period, he said. “This is an asset that could go up 2/3x from here,” he said—and he doesn’t want his customers to miss out.

“Until frankly there’s an ETF or a customer account somewhere where people can hold Bitcoin, this will be a way to democratize Bitcoin,” he said.

The fund, however, will only open to accredited investors, which the SEC defines as someone with an annual income of $200,000 or an institution with $5 million in assets. SkyBridge, set up in 2005 and based in New York, manages $9.3 billion in assets.

Saylor has bought over $1 billion in Bitcoin, Saylor claimed on Twitter this weekend. Today, Saylor tweeted, “Bitcoin is like a battery charged with monetary energy.”