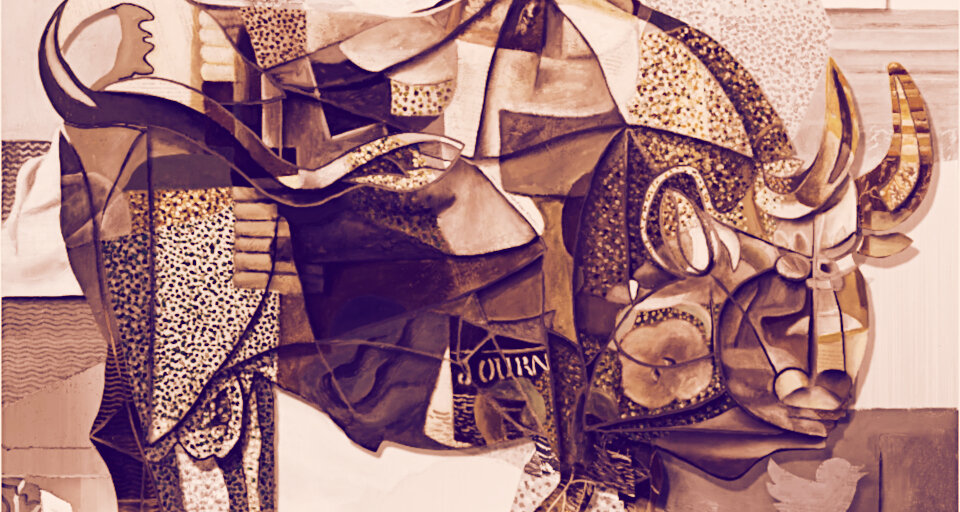 An NFT in the form of an animated bull just sold for $19,500—26X its original asking price—in the latest of a series of buzzy transactions on Nifty Gateway, the NFT marketplace purchased by the Winklevoss twins last year.

The virtual “painting,” part of a series called “Picasso’s Bull,” is a sort of garish amalgam of crypto symbols and faux-cubism. Trevor Jones, an Edinburgh-based NFT artist and painter, initially sold nine more NFTs with this silver colorway for $750 each. He also sold 25 in bronze, three in gold, and one in a kind of taupe.

The original buyer is Micah Johnson, a former professional baseball player turned NFT investor, who confirmed the news that he’d offloaded the work in a tweet:

Now that i moved one for 19.5k, these numbers are going to sky rocket. I was the sacrificial lamb

The NFTs practically hit you over the head with their pro-crypto messaging (these are, quite literally, bulls the color of money), which the recent sale has only further solidified on the meta level; these paintings are clearly hot commodities, with the potential to generate huge returns for investors.

Jones told Decrypt that he created the “Picasso’s Bull” project over the course of four months, and even got an art historian, Bill Hare, to write an accompanying essay, which expands on the work’s meta-relationship to its own value.

NFTs: A Revolution for Digital Capitalists

Back in July, the one-of-one “Picasso’s Bull” sold for $55,555 to Pablo Rodriguez-Fraile, who,  along with Collborn Bell, oversees an NFT collection called the Museum of Crypto Art.

Jones said that while he doesn’t know the user (@sirnigel) who dropped $19,500 on his silver bull, he’s friendly with Micah Johnson, who he says actually makes his own NFTs in addition to investing.

Other NFTs in Jones’ series of 10 silver bulls are currently on sale for much more—one seller, looking for $25,555 yesterday, has bumped the price to $48,500 today.

Asked about the reason for this sustained wave of interest and value, Jones told Decrypt: “I have no idea but I’m not complaining!”