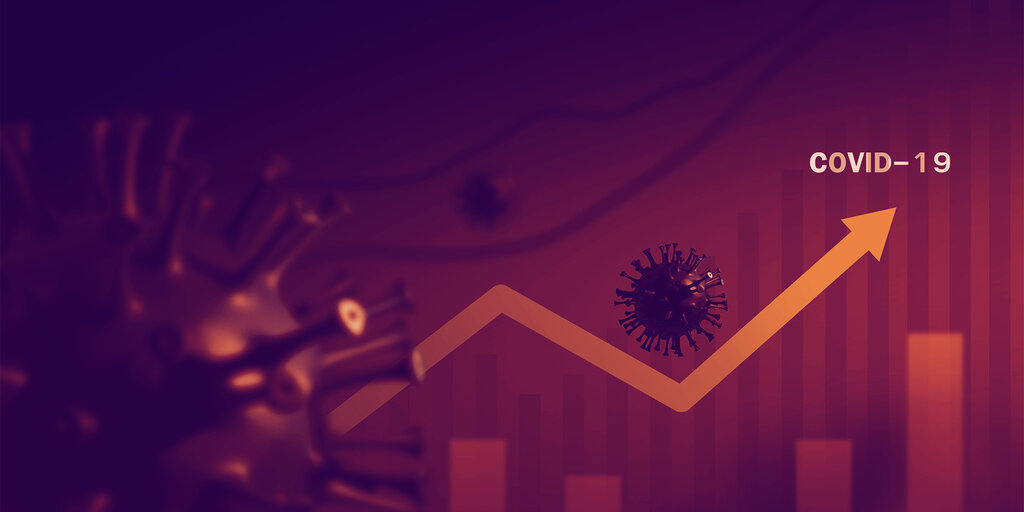 When historians look back on 2020 and ask what will it be most known for, there are two stories they could tell. On the one hand, 2020 could be defined by a planet rocked by a pandemic that caused millions to die, and an economic fall out that will be felt long after a vaccine is rolled out.

On the other hand, historians might say that 2020 was the year investors and their returns took off into the stratosphere. In particular, Bitcoin’s record-breaking price surge, and the American stock market, which has also hit levels never seen before.

In today’s Market Watch we’re going to be exploring why assets went bananas when many people’s lives across the world took a turn for the worse.

The stock market boom and Bitcoin’s rise happened at roughly the same time, and for the same reasons. As COVID slowly marched across the globe, between February 19 and March 23, the S&P 500 index lost a third of its value. Between February 13 and March 15, Bitcoin’s value was cut in half, from $10,000 – $5,000.

But since then both asset classes have rocketed. Bitcoin is now comfortably sat north of $16,000, and has surpassed the previous all-time-high set in 2017 last week. At the end of November, the Dow Jones Industrial Average crossed the 30,000 mark for the first time ever. The Nasdaq came soon after breaking records, and November was the best month ever for global equities since 1982.

Money Pours Out of Gold in Favour of Bitcoin

The catalyst was, and Bitcoin fans aren’t going to like this, the Federal Reserve’s response to what it believed was going to be a catastrophic meltdown of the economy.

The Federal Reserve stepped in with a broad array of actions to limit the economic damage from the pandemic, including up to $2.3 trillion in lending to support households, employers, financial markets, and state and local governments.

“We are deploying these lending powers to an unprecedented extent [and] … will continue to use these powers forcefully, proactively, and aggressively until we are confident that we are solidly on the road to recovery,” said Jerome H. Powell, Chair of the Federal Reserve Board of Governors.

That unwavering support helped investors shift from panic to optimism instantaneously. By summer the markets had recovered more than half of their value. The Federal Reserve’s commitment also included purchasing corporate debt, including high-yield “junk” bonds-slices of corporate debt with a higher risk of default than most bonds.

In February the corporate bond market had completely frozen, but in the six weeks from May to June-after the Fed agreed to step in-companies issued $560 billion of bonds, double the normal level.

The actions of the Federal Reserve, which were mirrored by central banks elsewhere – albeit not to the same extent – forestalled a cascade of bankruptcies that could have followed as consumers were told to stay at home.

Why did Bitcoin do the same? Because Bitcoin has become an asset like any other in an investor’s portfolio. While it may not be on the Fed’s list of things to help, Bitcoin has benefitted from investor confidence.

Take a look at the slew of institutional investors and blue-chip companies that have suddenly become Bitcoin’s biggest fans. Its performance has out performed that of traditional stocks and shares, but it has behaved in largely the same way since March of this year.

While Bitcoin was built on libertarian ideals, it has become an asset to hold like any other.

At the same time this has all been going on, COVID worked its way through every country across the globe. At the time of writing, more than 1.5 million people have died, with a confirmed 65 million cases and rising.

The impact to the global economy was nothing short of breathtaking. Global economic output dropped 4.4%. If you look only at advanced economies that number grows to 5.8%

In the UK, GDP dropped by 25% in April. In America, the blow to jobs has been savage, with unemployment rising from 4% to about 16%, the highest rate since records began in 1948. It was a similar story across the globe.

The furlough schemes employed by governments were extensive. In the UK 19% of the workforce was furloughed, in Germany 23% and in France that number went up to 41%. The governments have been borrowing at levels not seen since World War II.

The Institute of International Finance recently reported that the ratio of global debt to gross domestic product will rise from 320 per cent in 2019 to a record 365 per cent in 2020.

What we’re seeing is while big firms’ shares have soared thanks to help from the Fed, small businesses are struggling to get cash from Uncle Sam. Why?

The long divorce between Wall Street and Main Street

During the 1950s, the fortunes of large companies and that of individual consumers used to be much more closely aligned, for a number of reasons.

In that decade, 90% of the stock market was held by small retail investors. When the economy did well, those firms also tended to do well, meaning their stock prices would rise. As stock prices rose, the overwhelming majority of working Americans felt their wealth increase. The health of both tended to move together. In 2020, things look very different. Today those retail investors are responsible for less than 30% of stock market trading volume.

While most Americans (52%) own stock via investment plans like pensions, according to the Pew Research Centre, the wealth of the rich is far more concentrated in stocks. Some 88% of those earning more than $100,000 per year own stock, as opposed to 19% of those earning under $35,000.

The vast majority of all stocks owned by Americans are held by the richest 10% of households. This poses a quandary for policymakers. If the Fed did nothing during COVID, the damage wrought on rich and poor alike would have been far worse.

But the bailout, because of this divorce between the high street and high net worth individuals, has disproportionately benefited the wealthy. Where does Bitcoin sit in this equation?

Historically advocates of non-regulated digital currencies saw Bitcoin as a potential gateway for the world’s unbanked to be able to access financial markets they were previously barred from.

But Bitcoin’s behaviour, thanks to institutional investors eyeing up the opportunity to constrict the currency’s small liquidity supply by HODLing as much as they can get their hands on, is behaving more like an asset for the wealthy instead of an on-ramp for the poor. Indeed the CEO of Mastercard said last month Bitcoin can’t help the unbanked.

While Bitcoin is unique in that it can hold both positions, time will tell if the voices of economic inclusivity can be heard over the clamour of increasing profits.

What does this all mean?

There are three areas that 2020s split will have an impact: debt, fraud, and civil unrest.

In 2019, the World Bank said that previous waves of debt almost always led to global financial meltdowns, see: Latin America in the 1980s, Asia in the mid-1990s and the US housing market of the 2000s. The IIF concluded in its report on the status of rising debt this year is that, “more debt, more trouble.”

This year’s boom was built on the back of governments prepared to do whatever it takes to keep the lights on. That support is finite, and if businesses – and indeed Bitcoin – can’t showcase value above and beyond being propped up, a bubble is forming that will surely burst. Now Bitcoin is different thanks to its circulating supply, and we’ll talk more about that in next week’s long-read. But what’s bad for business, as we’ve seen this year, is also bad for Bitcoin.

The second way this year is likely to have an impact is fraud. Extended booms tend to encourage shifty behaviour, and the expansion before the covid crash was the longest on record.

We’re already starting to see examples of such financial gerrymandering recently. Luckin Coffee, a Chinese Starbucks wannabe, had allegedly fabricated 40% of its sales and Hin Leong, a Singaporean energy trader almost brought the country’s energy markets down after he hid giant losses. Fraud goes up as booms come to a close, and a big fraud or corporate collapse in America could rock the markets’ confidence, as it did when Enron went belly up in 2001 and Lehman Brothers led the stockmarket down in 2008.

Bitcoin has a similar problem. Whenever the price goes up, the amount of scams trying to lure gullible investors goes up. Security company Kaspersky recently released a report suggesting Bitcoin cybercrime will be a major issue next year thanks to the price boom.

Bitcoin Will Be a Key Target for Cybercriminals in 2021: Report

The last, and perhaps most visible problem that may occur is civil unrest. At the beginning of this year, inequality was growing for more than 70% of the global population, according to a study published by the UN.

The study also showed that the richest one per cent of the population are the big winners in the changing global economy, increasing their share of income between 1990 and 2015, while at the other end of the scale, the bottom 40 per cent earned less than a quarter of income in all countries surveyed. This year will have compounded these trends.

The International Labour Organisation – a UN agency that measures protest activities across the world – had found that social unrest had already been growing across the world before COVID. It’s predicting that trend will only increase next year.

Bitcoin however, sits somewhere in the middle. While the cryptocurrency is most fervently held in emerging economies like Turkey and Brazil – who are both struggling with their economies – it’s being bought up faster by corporate America.

If Bitcoin HODLers want the good times to continue, they may have to contend with the idea of BTC being less a subversive digital currency and more just another way the rich get richer.